This is the companion article to this one.

” In line with the aforementioned inhibitory effects of vagal receptors, systemic effects of aVNS can expected to be mostly from the sympatho-inhibitory origin (Deuchars et al., 2017). As illustrated in Figure 2A, aVNS modulates the biofeedback line to the brain so that this modulation shapes closed-loop reflex pathways, in analogy with neurobiological models from De Couck et al. (2011). Therefore, once again, diverse systemic effects of aVNS can be expected on the entire organism.

I highlighted the above quote to emphasize that though we are targeting the vagus nerve,  I’ve seen effects in the sympathetic tone in patients.  In some cases it’s more dramatic than the measured effect on vagal tone.  So it’s the balance.  Perhaps why, though not the complete picture, LF/HF or sympathetic/parasympathetic activity is so widely used as short hand for autonomic effect in HRV.

In fact, the actual stimulation pathway of aVNS is highly indirect with respect to the distant pathological organ or addressed functions of the body, since aVN has a transmitting but not a processing function. In particular, the stimulation pathway is circuitous. The pathway of the therapeutic electric stimuli starts with action impulses traveling from the peripheral somatosensory aVN endings in the auricle to the brainstem and then to higher order brain structures. Then, the pathway goes either from cranial nerves to the correspondent region of the body or, in analogy, from the brain to the spinal cord and then from spinal nerves to the target body’s region. Both somatic efferent arms (see section “Pain – Experimental Evidence”) and autonomic efferent arms (see section “Modulation of Autonomic Function”) can be expected to be modulated. Distant targets are thus affected via neurological networks or reflexes.

I’m highlighting the above quote because I’ve often thought of TAVNS as a “bank shot.”  Not a direct stimulation, but a dispersed one.

Electrical stimulation of the auricular vagus nerve (aVNS) is an emerging technology in the field of bioelectronic medicine with applications in therapy. Modulation of the afferent vagus nerve affects a large number of physiological processes and bodily states associated with information transfer between the brain and body. These include disease mitigating effects and sustainable therapeutic applications ranging from chronic pain diseases, neurodegenerative and metabolic ailments to inflammatory and cardiovascular diseases. Given the current evidence from experimental research in animal and clinical studies we discuss basic aVNS mechanisms and their potential clinical effects. Collectively, we provide a focused review on the physiological role of the vagus nerve and formulate a biology-driven rationale for aVNS. For the first time, two international workshops on aVNS have been held in Warsaw and Vienna in 2017 within the framework of EU COST Action “European network for innovative uses of EMFs in biomedical applications (BM1309).” Both workshops focused critically on the driving physiological mechanisms of aVNS, its experimental and clinical studies in animals and humans, in silico aVNS studies, technological advancements, and regulatory barriers. The results of the workshops are covered in two reviews, covering physiological and engineering aspects. The present review summarizes on physiological aspects – a discussion of engineering aspects is provided by our accompanying article (Kaniusas et al., 2019). Both reviews build a reasonable bridge from the rationale of aVNS as a therapeutic tool to current research lines, all of them being highly relevant for the promising aVNS technology to reach the patient. 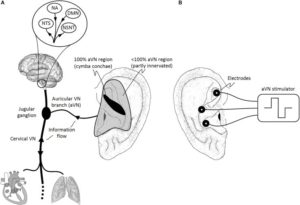 Electric stimulation of aVN endings with needle electrodes located within these central regions. NTS, nucleus of the solitary tract; NSNT, nucleus spinalis of the trigeminal nerve; NA, nucleus ambiguous; DMN, dorsal motor nucleus. This figure and figure caption was originally published in the sister manuscript to this review (Kaniusas et al., 2019), which was published in Frontiers of Neuroscience under the creative commons attribution license CC BY 4.0