I’ve made the first pass through of this informative paper.  It discusses the current state of the art of TAVNS or aTVNS which is auricular (ear) vagal nerve stimulation.  There seems to be consensus that percutaneous needles with stimulation are the way to go.  Also that closed loop biofeedback will make the stim more effective.  The stimulation of the future will be intensely personalized from where the needles go, to the biofeedback target used.
Though this is wildly intimidating to me, it bears remembering that what they are discussing is still beyond reach.  I can’t help but feel that some form of TAVNS is still worth exploring.
Full text here  TAVNS engineering issues Frontiers of Neuroscience 2019 aVNS_
Some highlights

Since aVNS projects directly to NTS (nucelus tractus solitarius) (Figure 1A), boththe autonomic and central nervous systems are modulatedby aVNS. Consequently, since the autonomic nervous system,composed out of sympathetic and parasympathetic branches,governs systemic parameters of cardiovascular, respiratory, and immunological functions to stay within homeostatic limits and,on the other hand, aVNS modulates the parasympathetic aVN,aVNS effects on the body can be expected to be systemic.
…  Favorably,motor VN fibers cannot be recruited in aVNS avoiding a lotof potential inadvertent effects, which is in clear contrast tothe invasive VN stimulation. Interestingly, scarification andcauterization of the outer ear was practiced earlier as a “gross acupuncture” for healing purposes, as a forerunner for aVNS.
… However, simultaneous activation of the left and right aVN may potentially boost stimulation effects due to increased sensory input to the brainstem.
… We hypothesize that a tingling sensation is necessary, in line with numerous studies (Kothe, 2009; Ellrich, 2011; Garcia et al.,2017; Sclocco et al., 2019). This is because the non-nociceptiveaVNS should recruit myelinated Aβfibers in the ear responsible for cutaneous mechanoreception and touch sensation, instead of myelinated Aδfibers for cutaneous pain and temperature sensation. Advantageously, relatively thick Aβfibers (with thediameter 7–10μm) can be easier recruited than relatively thinAδfibers (2–5μm).In particular, the pain perception – accompanied typicallyby unpleasant, pricking, or burning sensations – should be avoided
… Here relatively high stimulation frequencies of 20–25 Hz are required for the peripheral electrical stimulation of the parasympathetic system, whereas low frequencies of 0.5–10 Hz are required for sympathetic system.

Addendum on 1.22.2020  Wanted to add this schematic of a possible HRV feedback system for TAVNS 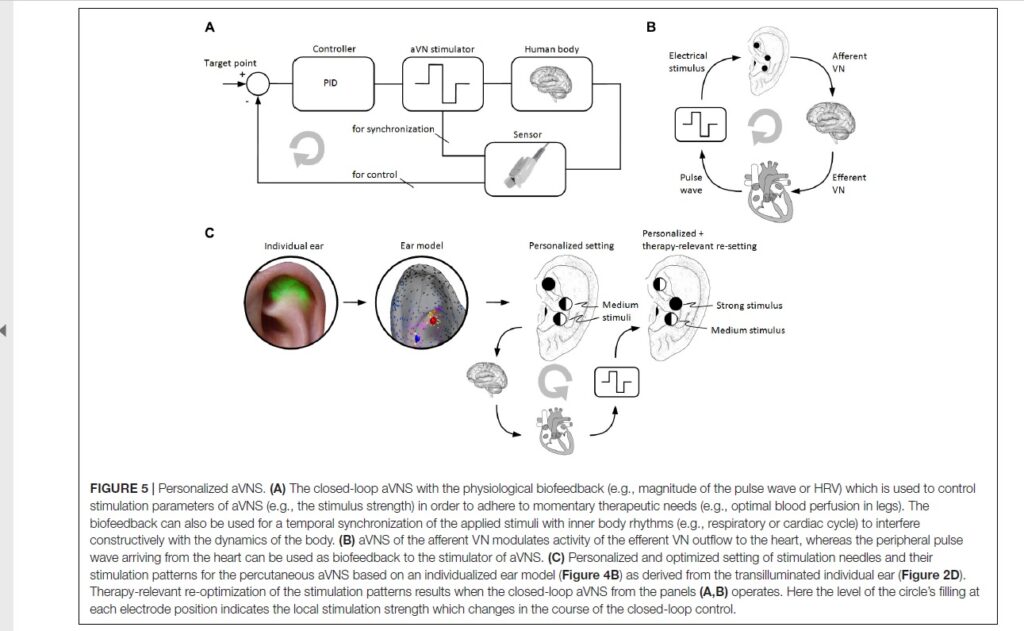