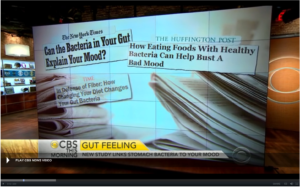 There is intense interest in the effects of the gut microbiome on mood and even autism.  The two strains highlighted below are part of the formulation I recommend for daily maintenance.

Scientists have also gathered evidence that gut bacteria can influence anxiety and depression. Stephen Collins, a gastroenterology researcher at McMaster University in Hamilton, Ontario, has found that strains of two bacteria, lactobacillus and bifidobacterium, reduce anxiety-like behavior in mice (scientists don’t call it “anxiety” because you can’t ask a mouse how it’s feeling). Humans also carry strains of these bacteria in their guts. In one study, he and his colleague collected gut bacteria from a strain of mice prone to anxious behavior, and then transplanted these microbes into another strain inclined to be calm. The result: The tranquil animals appeared to become anxious.

Overall, both of these microbes seem to be major players in the gut-brain axis. John Cryan, a neuroscientist at the University College of Cork in Ireland, has examined the effects of both of them on depression in animals. In a 2010 paper published in Neuroscience, he gave mice either bifidobacterium or the antidepressant Lexapro; he then subjected them to a series of stressful situations, including a test which measured how long they continued to swim in a tank of water with no way out. (They were pulled out after a short period of time, before they drowned.) The microbe and the drug were both effective at increasing the animals’ perseverance, and reducing levels of hormones linked to stress. Another experiment, this time using lactobacillus, had similar results. Cryan is launching a study with humans (using measurements other than the forced swim test to gauge subjects’ response).