I can’t say enough about this journal article.  It clearly lays out the physiology and brain anatomy involved in TAVNS with a focus on depression.  But it also discusses the impact of inflammation, microbiota, and even auricular acupuncture.  It is not written for the lay audience, but an incredible resource for anyone interested in where vagal nerve stimulation is going.  Incredible article.  I’m copying some of their final take aways here because this is the focus of my ongoing research, i.e. ways to harness HRV to help guide the stimulation parameters of the autonomic nervous system.

Previous studies have suggested that stimulation intensity could be set to a level that could arouse a tingling
but tolerable sensation (17, 61, 62). In addition, the intensity may
interact with frequency [individuals with low frequency stimulation tend to be able to tolerate higher stimulus intensities than
those who receive high frequency stimulation (88)]. However,
investigators (9) have applied subthreshold taVNS (the patients
could not feel the sensation) and relieved symptoms in patients
with MDD, which calls for further research on this topic.
Finally, very few studies have been carried out to explore the
“dose effect” of taVNS, i.e., how long and how frequently we should
apply taVNS. iVNS stimulation usually lasts for many hours per
day. Such durations are unrealistic for taVNS. Current studies
range from 30-min stimulation durations two times per day (17)
to 15-min stimulation durations five times per week (9). Also, if
the patients were trained to apply the taVNS by themselves, the
problem of compliance is difficult to evaluate and may somehow
counterbalance the interest for such a technique.
In summary, investigators have used a wide range of stimulation parameters in taVNS treatment of depression. Identifying
the optimal stimulation parameters and “dose” may represent the
crucial next step for taVNS research.

Depression is a highly prevalent disorder, and its treatment is far from satisfactory. There is an urgent need to develop a new treatment for depression. Although still at its early stage, transcutaneous auricular vagus nerve stimulation (taVNS) has shown promising potential for treating depression. In this article, we first summarize the results of clinical studies on the treatment effect of taVNS on depression. Then, we re-analyze a previous study to identify the specific symptoms taVNS can relieve as indicated by subscores of the 24-item Hamilton Depression Scale in patients with depression. We found that taVNS can significantly reduce multiple symptoms of depression patients, including anxiety, psychomotor retardation, sleep disturbance, and hopelessness. Next, we pose several hypotheses on the mechanism of taVNS treatment of depression, including directly and indirectly modulating the activity and connectivity of key brain regions involved in depression and mood regulation; inhibiting neuro-inflammatory sensitization; modulating hippocampal neurogenesis; and regulating the microbiome–brain–gut axis. Finally, we outline current challenges and lay out the future directions of taVNS treatment of depression, which include (1) intensively comparing stimulation parameters and “dose effect” (treatment frequency and duration) to maximize the treatment effect of taVNS; (2) exploring the effect of taVNS on disorders comorbid with depression (such as chronic pain disorders, cardiovascular disorder, and autism) to provide new “two-for-one” treatment approaches for patients with these disorders; and (3) applying multiple scale methods to explore the underlying mechanism of taVNS. 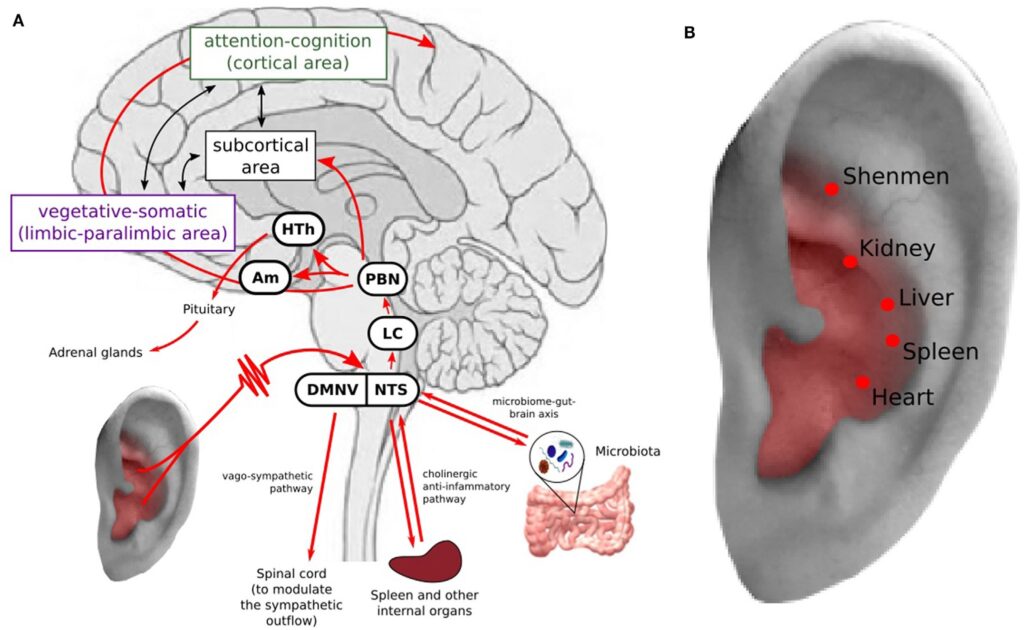