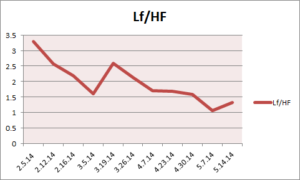 I am adding this study because it relates directly to a patient I am seeing with severe tinnitus.  His HRV has  decreased over time, and his tinnitus has subsided somewhat. A very vexing medical condition indeed.  The graph is his LF/HF over time. LF/HF is a parameter that is calculated from the heart rate tracing taken during treatment and correlates with stress levels.
Brain Areas Controlling Heart Rate Variability in Tinnitus and Tinnitus-Related Distress
* E-mail: sven.vanneste@ua.ac.be