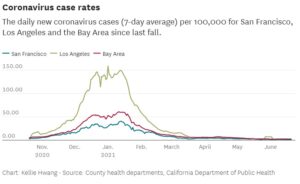 Throughout most of the pandemic, San Francisco and the Bay Area managed to contain the spread of the virus to a far greater degree than Los Angeles County — especially during the winter surge, when Southern California became the nation’s hot spot.

But now, after the dramatic plunge in case rates, positive test rates and deaths that accompanied the rollout of vaccines, the paths of the two metropolitan areas have converged closely.

One of the most salient outcomes when thinking about herd immunity is the fact that you can have individual cases but they don’t ripple out into the community with ongoing transmission,” he said. “Both of these areas show this convincingly at this time.”

The Bay Area, and San Francisco in particular, generally took a more cautious approach in their pandemic health restrictions. Experts have said Bay Area residents overall followed protocols closely, and many are tech workers who have been able to work from home.

San Francisco was cited as having the lowest mortality rate of any major U.S. metropolitan area during the pandemic, and currently has a rate of 0.1 deaths per 100,000 over the past seven days, versus 0.3 in Los Angeles County.

In a striking indicator of its recovery, Los Angeles County’s average new deaths per day last week even dipped below the averages for both the Bay Area and San Francisco.