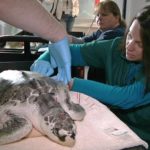 This is such a great story.

“They haven’t been eating in a couple of weeks, so they don’t have the energy that it takes to be able to fight off some of these things,” said Connie Merigo, head of the aquarium’s marine rescue team.

Vets used laser therapy, antibiotics, enriched meals and other treatments to help turtles recover their health and strength before being returned to the wild.
Still, the sophisticated treatments could not help 14 sea turtles. That includes Dexter and Fletcher Moon, who are unable to use their front flippers — making it impossible for them to forage for food in the wild or escape from sharp-toothed predators prowling off the coast.
“We reach a point, sometimes, in the therapy for these turtles that the traditional methods aren’t working the way we want them to, and so we’ve reached out to a licensed acupuncturist,” Merigo said.
One other turtle, a loggerhead, is also getting acupuncture treatment; the other 11 not yet back in the wild are continuing on traditional treatments for lingering infections and orthopedic ailments.
The acupuncture is intended to reduce stress, increase blood flow and boost the immune system — just as in humans.
Dexter and Fletcher Moon have already had three acupuncture sessions, scheduled once a week, said Merigo, who broke into a broad smile as she described their improvements over the past three weeks.
“These two turtles really had very limited limb use and they weren’t eating. We are seeing improved limb use and improved appetite,” Merigo said. “They are eating on their own, which is fantastic.”