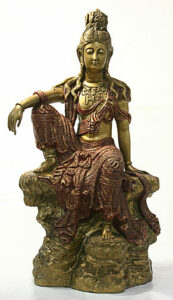 To examine the effect of acupuncture on Zhubin (KI9) in reducing alcohol craving in alcohol-dependent patients.

Twenty male alcohol-dependent patients were randomly assigned to two groups, a treatment group (10 cases, age 43.0±6.8 years) and a placebo group (10 cases, age 44.5±7.9 years). The treatment group was treated with real needle acupuncture on Zhubin (KI9) twice a week for 4 weeks, and the control group was treated with placebo needle acupuncture. Both groups were given acupuncture treatment using Park Sham Device (PSD). Alcohol craving was measured by the Visual Analogue Scale (VAS) before treatment to establish a baseline, and after 1, 2, and 4 weeks of treatment. Repeated measures ANOVA was used to determine the main and interaction effects of time and on the outcome measure (VAS).