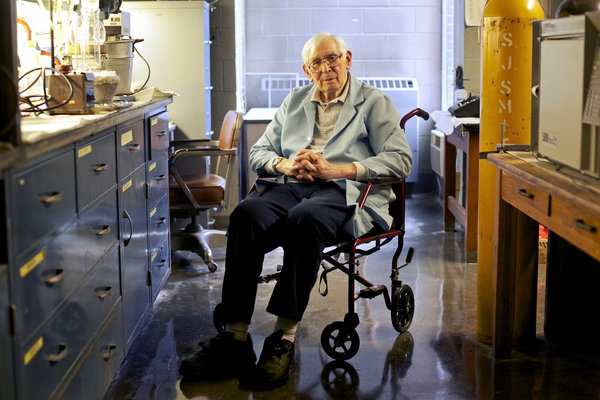 Dr. Kummerow is 99. Makes him more credible, am I right?

A Lifelong Fight Against Trans Fats

In 1957, a fledgling nutrition scientist at the University of Illinois persuaded a hospital to give him samples of arteries from patients who had died of heart attacks.

When he analyzed them, he made a startling discovery. Not surprisingly, the diseased arteries were filled with fat — but it was a specific kind of fat. The artificial fatty acids called trans fats, which come from the hydrogen-treated oils used in processed foods like margarine, had crowded out other types of fatty acids.

The scientist, Fred Kummerow, followed up with a study that found troubling amounts of artery-clogging plaque in pigs given a diet heavy in artificial fats. He became a pioneer of trans-fat research, one of the first scientists to assert a link between heart disease and processed foods.

It would be more than three decades before those findings were widely accepted — and five decades before the Food and Drug Administration decided that trans fats should be eliminated from the food supply, as it proposed in a rule issued last month.

Now, Dr. Kummerow (KOO-mer-ow) is still active at age 99, living a few blocks from the university, where he runs a small laboratory. And he continues to come to contrarian conclusions about fat and heart disease.

In the past two years, he has published four papers in peer-reviewed scientific journals, two of them devoted to another major culprit he has singled out as responsible for atherosclerosis, or the hardening of the arteries: an excess of polyunsaturated vegetable oils like soybean, corn and sunflower — exactly the types of fats Americans have been urged to consume for the past several decades.

The problem, he says, is not LDL, the “bad cholesterol” widely considered to be the major cause of heart disease. What matters is whether the cholesterol and fat residing in those LDL particles have been oxidized. (Technically, LDL is not cholesterol, but particles containing cholesterol, along with fatty acids and protein.)

“Cholesterol has nothing to do with heart disease, except if it’s oxidized,” Dr. Kummerow said. Oxidation is a chemical process that happens widely in the body, contributing to aging and the development of degenerative and chronic diseases. Dr. Kummerow contends that the high temperatures used in commercial frying cause inherently unstable polyunsaturated oils to oxidize, and that these oxidized fatty acids become a destructive part of LDL particles. Even when not oxidized by frying, soybean and corn oils can oxidize inside the body.

If true, the hypothesis might explain why studies have found that half of all heart disease patients have normal or low levels of LDL.

“You can have fine levels of LDL and still be in trouble if a lot of that LDL is oxidized,” Dr. Kummerow said.

This leads him to a controversial conclusion: that the saturated fat in butter, cheese and meats does not contribute to the clogging of arteries — and in fact is beneficial in moderate amounts in the context of a healthy diet (lots of fruits, vegetables, whole grains and other fresh, unprocessed foods).

His own diet attests to that. Along with fruits, vegetables and whole grains, he eats red meat several times a week and drinks whole milk daily.

He cannot remember the last time he ate anything deep-fried. He has never used margarine, and instead scrambles eggs in butter every morning. He calls eggs one of nature’s most perfect foods, something he has been preaching since the 1970s, when the consumption of cholesterol-laden eggs was thought to be a one-way ticket to heart disease.

“Eggs have all of the nine amino acids you need to build cells, plus important vitamins and minerals,” he said. “It’s crazy to just eat egg whites. Not a good practice at all.”

Dr. Robert H. Eckel, an endocrinologist and former president of the American Heart Association, agreed that oxidized LDL was far worse than nonoxidized LDL in terms of creating plaque.

Robert L. Collette, the president of the Institute of Shortening and Edible Oils, a trade association, says oil manufacturers work with their customers to take precautions against oxidation.

“Oxidation is something that consumers can detect,” he said. “Therefore, it is in everyone’s best interest to control it.”

The long arc of Fred Kummerow’s life and career illustrates the frustratingly slow pace of science and the ways in which scientific conformity can hinder the search for answers. Born in Germany just after World War I broke out, he moved to Milwaukee with his family when he was 9. His father, who worked at a cement block factory, did not have the money to send him to college, so Dr. Kummerow worked full time at a drug distribution company while attending the University of Wisconsin in the evenings. After he earned a Ph.D. in biochemistry, his first job was at Clemson University in South Carolina, where he helped prevent thousands of deaths in the South from pellagra, a disease resulting from a deficiency of vitamin B3.

His early research on trans fats was “resoundingly criticized and dismissed,” said Dr. Walter Willett, the chairman of the nutrition department at the Harvard School of Public Health, who credited Dr. Kummerow with prompting his desire to include trans fats in the Nurses’ Health Study. A 1993 finding from that study, which showed a direct link between the consumption of foods containing trans fats and heart disease in women, was a turning point in scientific and medical thinking about trans fats.

“He had great difficulty getting funding because the heart disease prevention world strongly resisted the idea that trans fats were the problem,” Dr. Willett continued. “In their view, saturated fats were the big culprit in heart disease. Anything else was a distraction from that.”

At an age when life itself is an accomplishment, Dr. Kummerow said he had no intention of stepping away from the work that has consumed him for six decades. He continues to work from home and talks daily to the two scientists who work in his lab, which receives funding from the Weston A. Price Foundation.

His wife of 70 years, Amy, died last year at age 94 from Parkinson’s disease; he has three children, three grandchildren and a great-grandchild.

He takes no medications, and his mind shows no sign of aging: He has an encyclopedic recall for names, dates and, more impressive, complex scientific concepts. After his muscles became inflamed from a blood pressure drug that he has since stopped taking, he started using a wheelchair combined with a walker.

His most significant health problem, appropriately enough, was an artery blockage at age 89 — probably a result of the inevitable effects of aging, not diet.

Bypass surgery took care of the blockage, and the fact that he now has an artery from his arm running into his heart has made him even more determined to keep working. Heart disease remains the leading cause of death for Americans, and he would like to stick around to continue funding research that will help change that.

“What I really want is to see trans fats gone finally,” he said, “and for people to eat better and have a more accurate understanding of what really causes heart disease.”