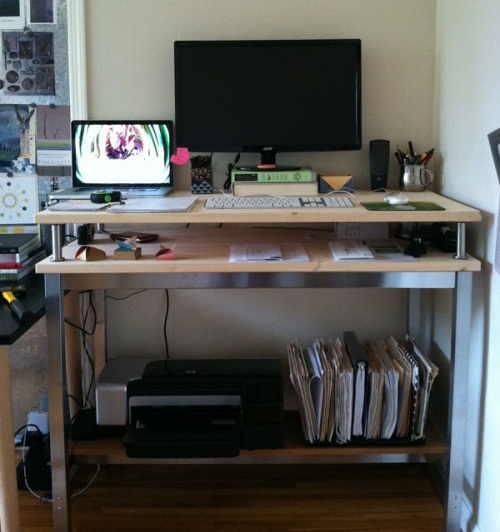 Stand up for health

We discussed this in a previous posts with links to information about tweaking the workplace.  This article looks at the hazards of sitting at home, in particular the risks to your health of TV watching. If you throw in the many hours a day most of us have to sit at our jobs, let alone the hours spent in a car in many parts of the country, the sitting hours really add up.  The health risks are there even if you get a half hour of exercise a day.  I’m definitely going to invest in a standing desk for home… There are a number of possibilities modifying Ikea offerings for example the one featured here.  I would maybe change some things design wise so it would blend into my decor, but you get the idea.

Get Up. Get Out. Don’t Sit.
By GRETCHEN REYNOLDS

Watching television is not, of course, in and of itself hazardous, unless you doze off and accidentally slip from the couch onto a hard floor. But television viewing time is a useful, if somewhat imprecise, marker of how much someone is engaging in so-called sedentary behavior.

And the findings were sobering: Every single hour of television watched after the age of 25 reduces the viewer’s life expectancy by 21.8 minutes…

If you exercise for 30 minutes a day, she says, “take time to reflect on your activity levels for the remaining 23.5 hours,” and aim to “be active, sit less.”