This data is looking quite promising.  I had clinical success with this 30+ yr old male almost immediately, and his migraines have remained gone, though he still gets an occasional aura.
The last treatment combined acupuncture with Tavns with some modifications.  I had been noticing that the sympathetic activity was often lower in patients receiving Tavns and I couldn’t figure out why, since you would expect the parasympathetic to be higher since we’re targeting vagal activity.  I sort of ignored that finding until I realized, that, of course, LF activity is a representation of sympathetic activity but with some parasympathetic activity also.  Of course, more and more data must be collected to confirm findings, but this last treatment looks promising! 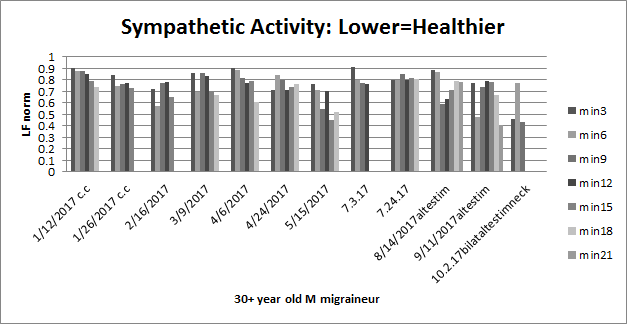