This is from a recent issue of Medical Acupuncture and discusses the importance of the vagus nerve in auricular acupuncture.  My research, such as it is, is focussed on the stress response and the role of the autonomic nervous system in acupuncture .

Until recently, both Western medicine and traditional Oriental medicine paid little attention to the autonomic
nervous system (ANS) and its relationship to the external ear. Nonetheless, several of the acupoints
used in the classic National Acupuncture Detoxification Association (NADA) protocol4 for drug detoxification
included the ear points for the Lung, Liver, and Kidney, all of which are found in the concha region
of the auricle that is innervated by the parasympathetic vagus nerve. The NADA protocol also includes the
nearby Sympathetic point, the functionally opposing part of the ANS. More recent research and newer
theoretical perspectives have highlighted the role of the vagus nerve and its regulation by the hypothalamus
of the brain; this research has enabled a broader understanding of the underlying complex mechanisms of
auriculotherapy.
In 1994, Porges5 developed the polyvagal theory, which identifies two functionally distinct branches
of the vagus, or tenth cranial nerve. One vagal branch affects visceral experiences and parasympathetic
control of the heart, lungs, and digestive tract. The more primitive vagal nerve branch elicits immobilization
behaviors (such as freezing or feigning death when a predator is near), whereas the more evolved
ventral vagal branch is linked to emotional expression, social communication, and self-soothing behaviors.
The measurement of vagal tone in humans has become one index of stress vulnerability 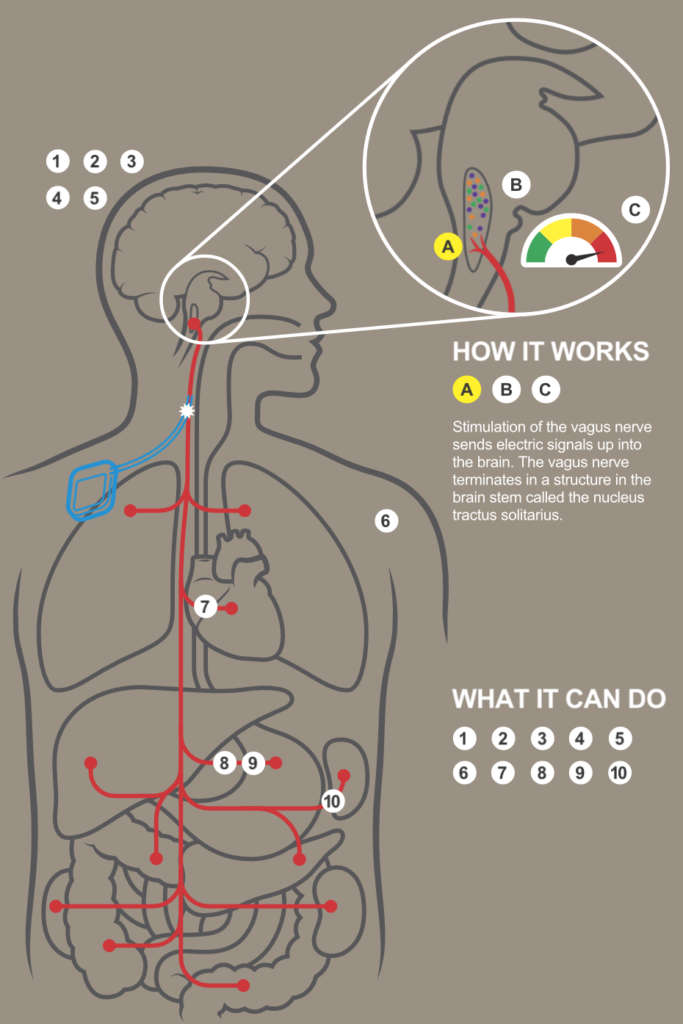