More back up data for my writing project.

1
Author information Copyright and License information Disclaimer
This article has been cited by other articles in PMC.

Pre‐ and postganglionic neurones of the autonomic nervous system are functionally differentiated according to their target tissues. Individual sympathetic pre‐ and postganglionic neurones can be activated or inhibited reflexly by appropriate physiological stimuli as has been shown in anaesthetized animals (mainly cats and rats) for neurones of the lumbar sympathetic outflow to skeletal muscle, skin and pelvic viscera and for neurones of the thoracic sympathetic outflow to the head and neck (Jänig, 2006; Jänig & McLachlan, 2013) and in humans for postganglionic neurones projecting in muscle or skin nerves (Jänig & Häbler, 2003; Wallin, 2013). The reflexes correspond to the effector responses that are induced by changes in activity of these neurones. The reflex patterns are characteristic and therefore represent the physiological ‘fingerprints’ for each type of sympathetic pathway. They are the functional expression of the neural circuits in spinal cord, brain stem and hypothalamus connected to the peripheral sympathetic pathways.

The same types of reflex patterns have been observed in both preganglionic and postganglionic neurones. The neurones in most of these pathways (e.g. the vasoconstrictor, sudomotor, motility‐regulating pathways, and other pathways) have ongoing activity whereas the neurones in other pathways are normally silent in anaesthetized animals (e.g. pilomotor and vasodilator pathways, pathways to sexual organs). It is likely that other target cells are similarly innervated by functionally distinct groups of sympathetic neurones that have not been systematically studied so far. These include heart (pacemaker, myocytes, coronary arteries), kidney (blood vessels, juxtaglomerular cells, tubules), urogenital tract, hindgut, spleen, and brown and white adipose tissue (Verberne & Sartor, 2010; Morrison, 2011, 2013).

Several systematic studies have been made on the functional properties of parasympathetic pre‐ and postganglionic neurones. The principle of organization into functionally discrete pathways is likely to be the same as in the sympathetic nervous system, the main difference being that some targets of the sympathetic system are widely distributed throughout the body (e.g. blood vessels, sweat glands, erector pili muscles, fat tissue) whereas the targets of the parasympathetic pathways are more restricted (Jänig, 2006; Jänig & McLachlan, 2013). 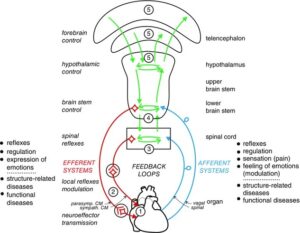