I am submitting my E poster for the International Neuromodulation Society today.  It is an observational case study looking at the potential for using DFAα, a nonlinear HRV as a biomeasure to evaluate  the addition of Transcutaneous Vagal Nerve Stimulation (TAVNS) to standard acupuncture treatment.  Acupuncture improves autonomic tone (increases vagal-parasympathetic activity and decreases sympathetic activity) in part by stimulating the Neuroendocrine immune response.  The hypothesis is that adding TAVNS to acupuncture treatment, we will see more of an improvement in autonomic tone.  The other hypothesis is that by using DFAα, it will correlate with standard frequency measures LF/HF but might be more robust since it can be measured every minute, and is less prone to artifact.  My study was partially successful, but there is still room for improvement.  With better electrode placement and parameters, I think I’ll get there.  pdf here   INS Poster 2021 8.24.2021 version 2

An expanded version of the poster follows the official abstract.

­­Improved autonomic balance leads to reduction in inflammation as well as other health benefits. Inflammation is implicated in medical conditions from cardiovascular disease to depression, to cancer, to aging . Efforts to “hack” the autonomic nervous system with implanted vagal nerve stimulators have had some success. Transcutaneous Auricular Vagal Nerve Stimulation (TAVNS) has the promise of being a safe alternative since it relies on noninvasive afferent input to a peripheral branch of the vagus. Recent research has helped to define best parameters for TAVNS treatment, including frequency, intensity, electrode placement and timing. As with any treatment modality, however, individual patient variation can affect the efficacy of implanted vagal nerve stimulators and TAVNS. There are some exploratory investigations using heart rate variability (HRV) as feedback for implanted vagal nerve stimulation and for TAVNS also. Acupuncture has been shown to improve autonomic balance, so the hypothesis was that TAVNS added to acupuncture treatment would further improve HRV and autonomic balance.

Patients monitored (HRV) in supine position for 5 minute baseline and then for entire treatment including TAVNS application, needling and resting with needles in for additional 20 minutes. TAVNS applied using clip electrode on the cymba concha bilaterally, and in some instances unilaterally. Frequency of TAVNS varied between, 1 hz, 25Hz, or 100 hz. HRV analysis of 3 minute segments during treatment using several HRV parameters including time, frequency and nonlinear analysis. 1 minute segments for DFAα1 (a nonlinear parameter) were also charted.

There was individual patient variation in HRV response with added TAVNS. HRV analysis is characterized by a significant noise/signal ratio. DFAα1 mitigated that problem. Patients who showed the most improvement were those who had low HRV to start, though other variables such as clinical condition and gender might play a role.

The hypothesis that TAVNS would improve HRV did not hold up in all patients. Of the HRV parameters measured and recorded, DFAα1 over one minute segments had the strongest signal/noise ratio so was the most promising as a measure. Furthermore, HRV analysis might have the potential to determine best TAVNS parameters for treatment such as intensity, frequency, duration etc… Individual patients’ HRV data will be presented and discussed.

TAVNS did not improve HRV in all patients so HRV may help to better define which patients would benefit most from TAVNS. DFAα1 was found to be the most reliable HRV measure.

Objective of this case study is to explore the use of Detrended Fluctuation Analysis (DFAα), a nonlinear measure,  compared to standard frequency Fast Fourier Transform measurement- Low Frequency to High Frequency (LF/HF) Heart Rate Variability as feedback during application of Transcutaneous Vagal Nerve Stimulation in the clinic.

Hypothesis: This study is part of an ongoing project to devise a simple TAVNS system for home use by patients. The hypothesis  is that adding TAVNS to clinical acupuncture treatment there will be a further improvement in autonomic tone, ie. increase parasympathetic (vagal) activity and decrease sympathetic activity.

Peripheral nerve stimulation in the form of acupuncture has been used for millenia for the treatment of pain, arthritis and other inflammatory conditions. Acupuncture has been shown with HRV to improve autonomic balance by decreasing sympathetic activity and increasing parasympathetic activity. Recent studies show that acupuncture needling activates the Neuroendocrineimmune response, a series of feedbacks which leads to a decrease in inflammation by downregulating inflammatory markers via the autonomic nervous system. 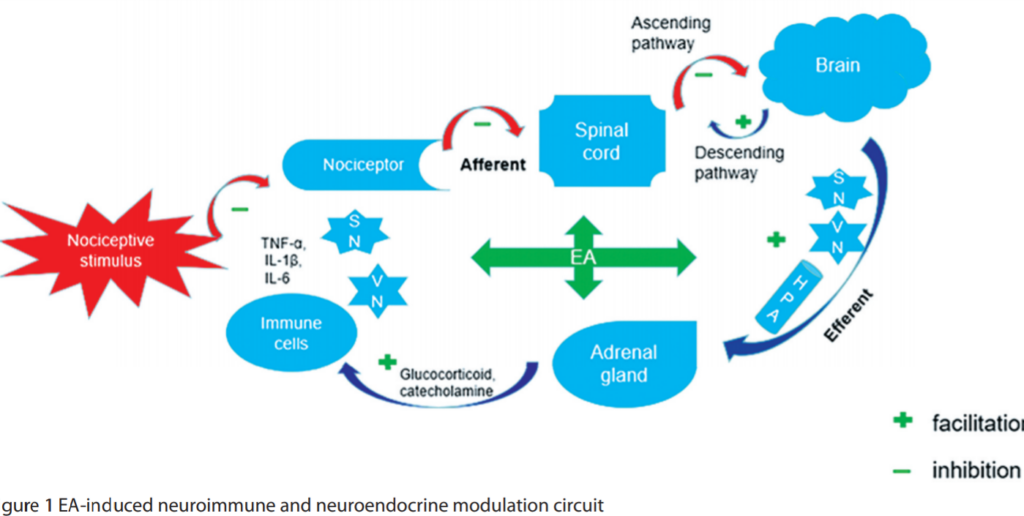 HRV is well suited for clinical study because it is noninvasive and give results over various time scales, minutes to hours or as a trend over time. Adding TAVNS to the acupuncture treatment might further improve autonomic balance because TAVNS connects to the nucleus tractus solitarius (NTS) and decreases sympathetic activity and increases vagal activity.

TAVNS. This poster presentation is part of a project to create a user friendly means to provide TAVNS to patients as an at home addition to their acupuncture treatment.  For that reason, the TAVNS unit is a simple, inexpensive one, and the ear electrode simple clip.

A sampling of patients’ data is included for demonstration, and is purely observational study.

Patients’ HRV was monitored (HRV) (Nonin Pulse Oximeter, analysis Vivosense software)  in supine position for 5 minute baseline and then for entire treatment including TAVNS application, needling and resting with needles in for additional 20 minutes. TAVNS applied using clip electrode on the cymba concha unilaterally on the left ear. Frequency of TAVNS was 1 hz. Analysis of 3 minute segments during treatment using several HRV parameters including time, frequency and nonlinear analysis. Q 1 minute data for DFAα was also collected.  Only DFAα 1 minute data is shown.

Electrode placement and contact, as well as stimulation parameters must be optimized.

Since this is an ongoing project to determine best

TAVNS may decrease sympathetic activity more than increase vagal activity according to some researchers.

In this study TAVNS was added to acupuncture which improves autono

When sympathetic activity and vagal activity were evaluated, as well as LF/HF, there were no substantial differences between treatment with acupuncture only versus the  addition of TAVNS. (Data was not presented here.)

The hypothesis that using  1 minute segments for DFAα1 (a nonlinear parameter) may reveal more detailed HRV response and be a more accurate reflection of TAVNS effect on the acupuncture patients’ response was not born out.  Though the response did reflect more subtlety in the response in detailed one minute segments, there was a modest difference.

To provide an in home solution to provide TAVNS to patients with more confidence, it would be optimal to document improved autonomic balance with the treatment protocol used.

Previous studies indicate that healthy people may not have as robust a response to TAVNS as do those with an underlying condition[i].

In this HRV analysis protocol, there was a 5 minute baseline and then needling and application of TAVNS with a 20 minute rest period.

A recent paper used the Higuchi Fractal Dimension, another nonlinear measure, and they did two sessions of TAVNS separated by 10 minutes of rest in between.  This may be a promising protocol if patients are willing and clinic time allows.

To use proprietary software with noninvasive oximeter probe important to the project, so that it could be implemented in a clinical setting.

Healthy subjects may not have as much of an improvement in their autonomic tone as, say, diabetic or otherwise healty subjects.  Likely elderly neither.

Not concerned with clinical outcomes in this presentation.

Not concerned with the overall TAVNS, trying to see individual differences between treatments, and perhaps individuals.s

Conclusion:  These anecdotal, observational data show a modest improvement in autonomic balance in some cases with the addition of TAVNS to standard acupuncture treatment.  By using HRV as a feedback varying duration of stimulation, parameters of stimulation and improved ear electrodes improvements in the protocol for in home TAVNS application may be obtained.