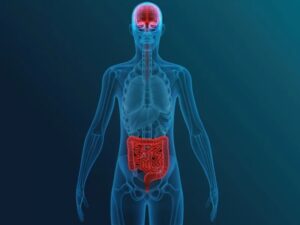 From fierce biotech
Ghrelin is a hormone that signals hunger

After the researchers blocked ghrelin signaling in rats, they observed that the animals showed signs of impaired memory, they reported at the annual meeting of the Society for the Study of Ingestive Behavior. That led the USC team to hypothesize that ghrelin may also help control memory.
Ghrelin is produced mainly in the stomach and binds to receptors on the vagus nerve, which connects the brain with major organs, including those in the digestive tract. Vagus nerve stimulation has been shown to enhance memory, and Scott Kanoski and colleagues at USC recently found that the vagus nerve influences memory functions that depend on the brain’s hippocampus…
Ghrelin and its receptor have been linked to a variety of biological processes including gastrointestinal activities, glucose metabolism, inflammation and neurological disorders such as seizures and depression. But efforts to target it for therapeutics have yielded mixed results.

Robert Sapolsky showed in his research that stress affects memory by damaging the hippocampus, which then makes more stress and damages the hippocampus further, so that it is a vicious cycle and memory impairment is the result. So the role of the vagus nerve in memory is not surprising.  What is new is the role of this specific hormone.
I don’t think I need to remind my dear readers that I’ve been working on noninvasive vagal enhancement for a long time with acupuncture, electroacupuncture and transcutaneous vagal nerve stimulation.  This is vagal activity from a brand new patient who presented with daily migraine during her first acupuncture treatment. 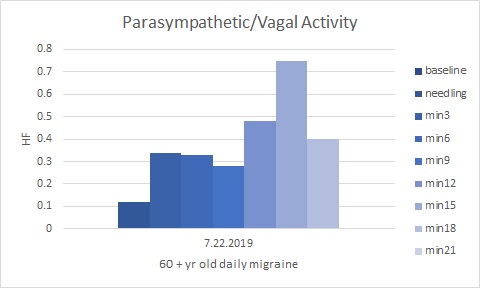