HRV in the Clinic: R.Tr edition

This is data from a new patient’s first visit.  She has a hypersensitive vagal response, so can feel ill/nauseated and dizzy under certain conditions.  This case may prove to be out an outlier of what I usually see in the clinic. I usually try to increase vagal activity/decrease sympathetic activity. In this case I may try to do the opposite. Clinical response will, as always, be the main determinant, but how her HRV responds should be interesting too.
In recent posts, such as this one, I discussed one part of the HRV project I’m working on.  That part is to better clarify which HRV measure is most appropriate for each patient.  Sympathetic? Nonlinear?  My current hypothesis is that in patients who have a high resting HRV as measured by RMSSD and Pnn50, so called time domain parameters, the nonlinear measures DFAα1 and SampEn may be more indicative of their stress response.
This patient has a very high RMSSD (50-75) and pnn50 (.39-.55), which is, perhaps, not surprising since she has a preponderance of vagal, or parasympathetic activity. So in a case like this, I would expect a pronounced response to needling since she is hypersensitive by nature.  I would also expect the nonlinear, or complexity measures to be more pertinent if there is a lack of  correlation between the different measures. We do see a spike in stress levels with needling.  High, but not unprecedented and then the immediate plummet down by 5 fold. Then a slow rise in stress levels as measured by LF/HF, but below baseline.  The next chart shows a nonlinear/complexity measure of Sampen.  This shows an improvement in stress levels, opposite to what we saw with LF/HF after the initial perturbations, until the last segment at min 18. Since these two measures show slightly different results, I would tend to pay more attention to the SampEn results. We will keep a watch on this patient, especially clinically (of course), but also in varying the treatment. 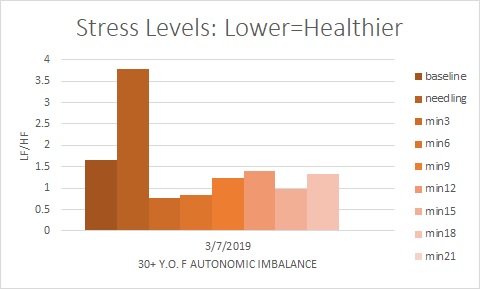 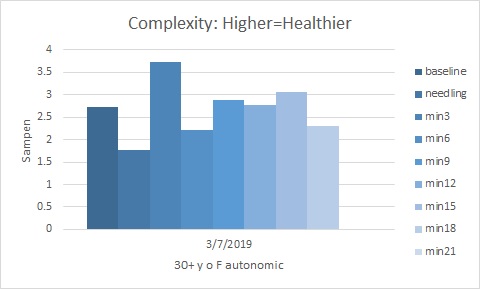