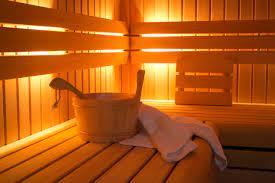 Saunas cause proteins to be activated called “heat shock proteins”.  They help with inflammation in general, but are of particular interest in their ability to fight inflammation in the brain. They also are associated with reduced cardiac causes of mortality.  Stay in for 20 to 30 minutes at 178 degrees.

The heat-shock response, one of the main pro-survival mechanisms of a living organism, has evolved as the biochemical response of cells to cope with heat stress. The most well-characterized aspect of the heat-shock response is the accumulation of a conserved set of proteins termed heat-shock proteins (HSPs). HSPs are key players in protein homeostasis acting as chaperones by aiding the folding and assembly of nascent proteins and protecting against protein aggregation. HSPs have been associated with neurological diseases in the context of their chaperone activity, as they were found to suppress the aggregation of misfolded toxic proteins. In recent times, HSPs have proven to have functions apart from the classical molecular chaperoning in that they play a role in a wider scale of neurological disorders by modulating neuronal survival, inflammation, and disease-specific signaling processes. HSPs are gaining importance based on their ability to fine-tune inflammation and act as immune modulators in various bodily fluids. However, their effect on neuroinflammation processes is not yet fully understood. In this review, we summarize the role of neuroinflammation in acute and chronic pathological conditions affecting the brain. Moreover, we seek to explore the existing literature on HSP-mediated inflammatory function within the central nervous system and compare the function of these proteins when they are localized intracellularly compared to being present in the extracellular milieu.