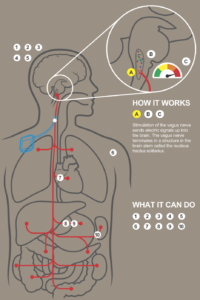 The Gut is called the Second Brain, but there may be even more linkages through gut bacteria.

I’ve been interested in vagal activity for longer than I want to admit (it might reveal my age) and it turns out that it’s more and more relevant to general health. We spoke about a possible autism link here.

But even conditions including depression, autism and neurodegenerative disease are now being linked to these tiny creatures.

The brain is the most complex object in the known universe so how could it be reacting to bacteria in the gut?