This is a nice study comparing sham to real Transcutaneous Auricular Vagal Nerve Stimulation to sham.  I 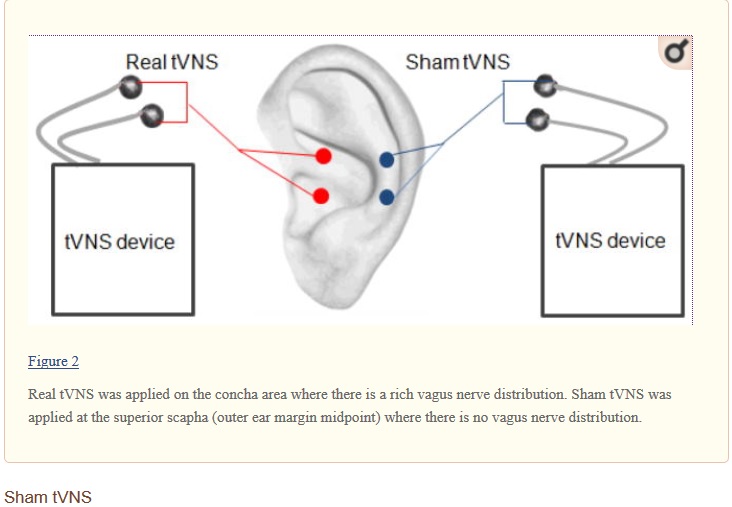 The electrode set up looks good since the real TAVNS is situated in cymba concha and meatus. This is from the Journal of Psychiatry Research, but done in the Institute of Acupuncture & Moxibustion, China Academy of Chinese Medical Sciences.

Transcutaneous vagus nerve stimulation (tVNS) may be a promising treatment for major depressive disorder (MDD). In this exploratory study, fMRI scans were acquired during continuous real or sham tVNS from 41 MDD patients. Then, all patients received real or sham tVNS treatments for four weeks. We investigated the functional connectivity (FC) of the nucleus accumbens (NAc) at different frequency bands during real and sham tVNS and explored their associations with depressive symptom changes after one month treatments. The results revealed: 1) during continuous real and sham tVNS there are significant positive FC between the NAc and surrounding areas including the putamen, caudate, and distinct areas of the medial prefrontal cortex (MPFC) and the anterior cingulate cortex (ACC); 2) compared with sham tVNS, real tVNS increased the FC between the left NAc and bilateral MPFC/rACC in the slow-5 band(0.008–0.027) and between the right NAc and left insula, occipital gyrus, and right lingual / fusiform gyrum in the typical low band (0.008–0.09); and 3) the FC of the NAc-MPFC/rACC during real tVNS showed a negative association with Hamilton Depression Rating Scale (HAMD) score changes in the real tVNS group after one month treatment, but not in the sham group. Our findings demonstrate that tVNS can modulate low frequency intrinsic FC among key brain regions involved in reward and motivation processing, and provide insights into the brain mechanism underlying tVNS treatment of MDD.