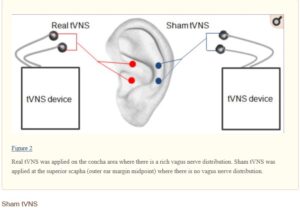 I wish I could say that I vehemently disagree with the conclusion of this literature review that TAVNS does not affect HRV.  As mentioned in this post, it is perhaps because it requires repeated attempts.  My studies in the clinic do not show decisive affect from TAVNS.  It is possible that I am asking the wrong question since this study finds that acutely TAVNS has little effect.  That doesn’t mean that it doesn’t do anything.  It does mean that HRV is not the best measure of acute response.

Non-invasive brain stimulation techniques, such as transcutaneous auricular vagus nerve stimulation (taVNS), have considerable potential for clinical use. Beneficial effects of taVNS have been demonstrated on symptoms in patients with mental or neurological disorders as well as transdiagnostic dimensions, including mood and motivation. However, since taVNS research is still an emerging field, the underlying neurophysiological processes are not yet fully understood, and the replicability of findings on biomarkers of taVNS effects has been questioned. The objective of this analysis was to synthesize the current evidence concerning the effects of taVNS on vagally mediated heart rate variability (vmHRV), a candidate biomarker that has, so far, received most attention in the field. We performed a living Bayesian random effects meta-analysis. To keep the synthesis of evidence transparent and up to date as new studies are being published, we developed a Shiny web app that regularly incorporates new results and enables users to modify study selection criteria to evaluate the robustness of the inference across potential confounds. Our analysis focuses on 16 single-blind studies comparing taVNS versus sham in healthy participants. The meta-analysis provides strong evidence for the null hypothesis (g = 0.014, CIshortest = [−0.103, 0.132], BF01 = 24.678), indicating that acute taVNS does not alter vmHRV compared to sham. To conclude, there is no support for the hypothesis that vmHRV is a robust biomarker for acute taVNS. By increasing transparency and timeliness, the concept of living meta-analyses can lead to transformational benefits in emerging fields such as non-invasive brain stimulation.