Given the anti-inflammatory properties discussed here, and the low risk profile of melatonin, I recommend it to help you get your zzzzz’s! 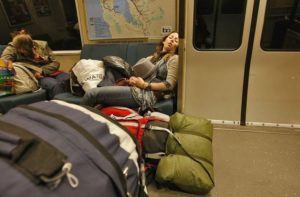 Increased blood pressure and reduced robustness of circadian rhythms are frequently reported in elderly subjects. The present study was aimed to investigate whether such changes can be reversed by daily melatonin ingestion. 97 normotensive and hypertensive volunteers of both genders and 63 to 91 years old participated. They lived in the Tyumen Elderly Veteran House on a self-chosen sleep-wake regimen to suit their personal convenience. The experiment lasted for three weeks. After one control week, part of the group (n=63) received 1.5 mg melatonin (MelaxenTM) each day at 22:30 h for two weeks. The other 34 subjects were placebo-treated. Systolic blood pressure (SBP), diastolic blood pressure (DBP) and heart rate (HR) were measured using semi-automated devices at 03:00, 08:00, 11:00, 14:00, 17:00, 23:00 h each day of the first and the third week. Specially trained personnel made the measurements, taking care not to disturb subjects´ sleep. Rhythm characteristics were estimated by means of single and population-mean cosinor analyses. Bingham test was used to compare rhythm parameters between groups and investigated physiologic variables. The 24-h HR rhythm was monophasic as described in other studies for young subjects though with a steeper increase in the morning. The daily SBP and DBP rhythms were bimodal. In reference to previously reported data of younger subjects, mean blood pressure of our cohort was elevated, particularly the nocturnal fall was less pronounced. Also, the overall SBP variability was higher as was the percentage of the 12-h component. Both values and also the SBP and DBP levels were reduced during melatonin treatment. The hypotensive effect of melatonin was most pronounced between 3:00 and 8:00 in the morning, i.e. at the time of the highest risk of adverse cardiovascular events, and in subjects with highest BP values before treatment. Moreover, the morning increase of HR was gentler what could have been of additional benefit. Melatonin not only has a direct hypotensive effect. Also, it stabilizes the internal temporal order enhancing the circadian component and the synchronization between rhythms of different physiological functions. This may further improve health and welfare of elderly subjects and particular of those with hypertension. Taken together our data show the usefulness of melatonin for adjuvant medication.