Stress monitoring can be useful in the acupuncture clinic since decreasing a patient’s stress levels can lead to better mood, immunity, pain levels, sleep and longer life.  The patient’s reaction to acupuncture can be instructive also, as illustrated in the following case.
A woman in her 70’s who came in with immune weakness having had antibiotics for sinusitis.  She had residual coughing and nasal drainage.
I will put up half of her data at a time. Each group of columns represents a clinic visit, 7 visits tabulated. 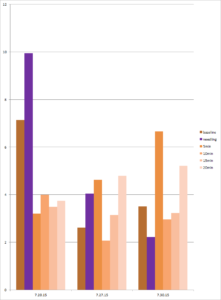 So her data show high stress levels (LF/HF) on her first visit.  Levels of .2 to 2 are normal.  So she is very high stress, and it goes up higher with needling (the dark purple column.)
Next visit, her overall stress is lower, but then increases toward the end of her treatment, not favorable.
The third visit, her stress decreases with needling, which can be a sign of a few things, but then, again, increases toward the end of the treatment.  This pattern of increasing is not favorable. 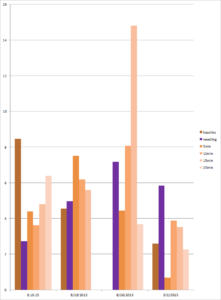 The next visit, again you see a very high baseline reading, with decrease with needling and then trending up. During this visit, she received electrical stimulation to boost her immune system.  She reported that her knee had swollen after this treatment, so of course, we didn’t repeat that.
The next visit she trended up again, and ended up having a migraine aura  equivalent after the treatment.
The next visit she trended up dramatically, even though she came down somewhat by the end.  She ended up having a full blown migraine after this visit.
The final set of data was a totally different treatment with fine needles, just a few points to try to avoid setting off any migraine or other untoward symptom
As you can see she had a dramatic decrease after needling which is a sign of resiliency, or increasing flexibility in the system (a good thing.)  And then, she trended down during treatment for the first time.
I was alerted to the fact that she might be over reacting to treatment, or might not be reacting well because of her stress level profiles. One could argue that I should have changed the treatment sooner, but as it is, it makes a good illustration.  So when she came in on  9.2.15  I was concerned even before I spoke to her and had planned what I would do to vary the treatment.  And sure enough, she had a negative report (full blown migraine) so I did a minimal simple treatment.
So though I don’t ever want to see negative results, I think this case is a good illustration of the utility of HRV stress testing during acupuncture treatment.  One could have predicted that the treatment was not skillful and needed to be changed on the basis of the HRV profile during treatment.