Sigh.  The vagaries of HRV, the challenge and the opportunity…

This is the story of a young woman (30 ish) with severe migraines, at least once per week.  Initial treatment might have caused a migraine so I dialed back the number of needles drastically to a key four. (3K, 7H, 4Sp, 6PC).  She still had migraines that she attributed to stress at work. Went on vacation and came back.She had zero migraines over vacation and her visit on 1.2.2020 shows overall good HRV.

There are issues with her data.  On 12.16.2019 in particular she appeared to be breathing deeply during treatment.  Ironically, this can screw up the HRV data and make it look artificially bad in terms of LF/HF and nonlinear data.  However, when we look at her RMSSD over time, it is not affected.  Dunno man.

Her data follows.  The thing is this.  In order to REALLY establish whether one treatment is better than another, I have to really know which HRV parameter is the most significant.  It seems that it varies from patient to patient.  With someone with a high intrinsic (healthy) HRV by time series, (RMSSD and Pnn50) nonlinear parameters are sometimes more important.  But not always, of course.

But it seems that the RMSSD tells a different story in this case than the other parameters.  Still working on this conundrum, so stay tuned. 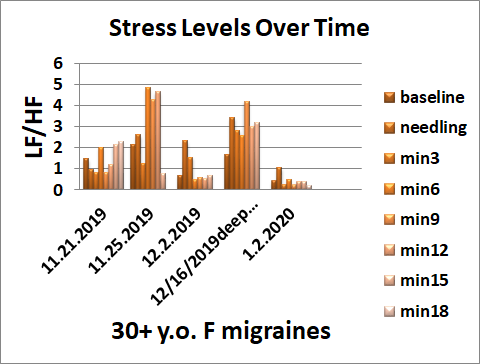