So PCOS stands for Polycystic Ovarian Syndrome. And HRV stands for Heart Rate Variability, a measure of autonomic balance, or in layman’s terms, the stress response or relaxation response.
I wanted to try to illustrate the gist of my research interest. I will start with this particular patient who is in her late 20’s and carries a diagnosis of PCOS and even with clomid does not ovulate. So she has been coming to me for acupuncture. I have done some previous posts on PCOS and HRV and the protocols here, here, here.
What these graphs show are some of the treatments I have her following the protocol using 2Hz strong stimulation electroacupuncture. What I would like to see is a decrease in her LFR/HFR ratio during treatment. As you can see the first three graphs from 6.2.2011, 6.20.2011, and 6.27.2011 all show minimal decrease in her LFR/HFR ratio. So I decided to abandon the protocol and do manual acupuncture with more emphasis on traditional treatment with standard TCM (Traditional Chinese Medicine) points. As you can see, she had a better relaxation response with that treatment as reflected in the decrease in her LFR/HFR ratio. Also notice that in the last graph, she also has a lower value of LFR/HFR more between the 1 and 2 range, which is the lower than in the other graphs. (So sorry for the poor quality of the graphs, will try to work on those and repost.)
I called her after analyzing the data to see how she was doing and she said that she had had some spotting, which was new for her. So we will see how she does with time and I’ll try to keep you posted. (For more info on my practice, please click here.) 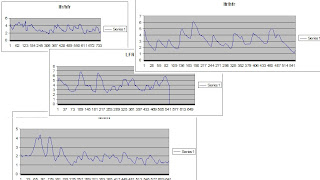