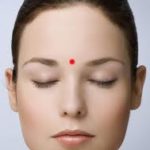 A study from 2011 exploring acupressure on Yin Tang, a follow up from a post  last week looking at press tacks on Yin Tang for preop anxiety reduction.  Their conclusion was that females were more likely to have a change in their HRV, but both genders experienced EEG changes.  Interesting!