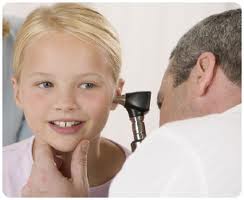 New guidelines from the Academy of Pediatrics.  We’ve discussed the conundrum of antibiotics for otitis media here and here.  Having completed a Pediatric Residency and passed my Boards (granted, this was back in the Dark Ages), this comes as such a 180′ turn around, it’s sort of difficult to believe.

Stricter diagnostic criteria and broader use of observation to further rein in antibiotic prescribing for acute otitis media emerged in a revision of American Academy of Pediatrics (AAP) guidelines.
The update, in the March issue of Pediatrics, also added a recommendation against antibiotic prophylaxis for kids with recurrent ear infections.
…
The 2004 guidelines used a three-part definition for acute otitis media:

The 2013 update also requires middle ear effusion for diagnosis, but it now has to be based on tympanometry or pneumatic otoscopy.
Although early acute otitis media can occur without effusion, the guidelines committee acknowledged, “the risk of overdiagnosis supersedes that concern.”