The gut is the “second brain,” meaning that it perceives and reflects the status of the mind.   This is the case of an 85 year old woman with severe gastric reflux that effects her mood to the extent that she sometimes wants to give up on life.  She also developed extreme night sweats and hot flashes.  Her tongue is cracked and red with purple sides.
I’m highlighting this clinical case to show the sort of patterns that I am seeking.
1.  Does the stress response reflect effective treatment?
2.  Does the acupuncture treatment addressing the TCM diagnosis improve treatment?
So the first chart shows her LF/HF a measure of her stress response during treatment from the first 5 minutes  to the second after needling. 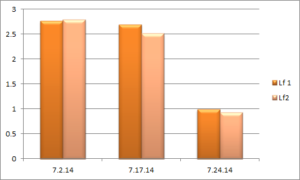 So you see a modest decrease in her LF/HF in the second two sessions.  So she showed some vagal enhance in those sessions.  I changed the treatment from 7.17.14  on 7.24.14 adding in points specifically for heat.  Her treatment 7.17.14 was

with an obvious emphasis on the spleen/stomach with some shen calming.
On 7.24.14  I did this treatment

(too lazy to change from the Spanish, I think you can figure it out, more fire points)
So if I show you the chart with her baseline LF/HF, it becomes more remarkable.  No baseline on the first treatment, but if you look at the baseline (pre) of the two subsequent treatments, there is a marked difference. Also 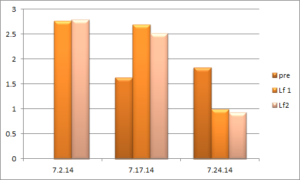 she made a special effort to tell me that she felt so much better after treatment.  Anecdotal?? Of course.  But what I’m about here is trying to tabulate some basics to be able to study in depth.