This data is from a patient who has been coming to the clinic for acupuncture for migraines for 3 years.  His migraines are not totally gone, but he’s extremely happy with the once per month frequency he is now experiencing.  He used to have migraines 3 to 4 times per week.  Somehow, he was still able to do an extremely high powered, high responsibility, high stakes job even with the migraines, but he is relieved and ecstatic to have them be so much less frequent.

As readers and patients know, I’ve been using some noninvasive electrical stimulation techniques to evaluate my HRV monitoring system, and to see what effects, if any, patients experience.  This particular data shows how Ne.Be. responded to bilateral alternating cymba concha (ear) stimulation.  Stimulating the cymba concha stimulates the auricular branch of the vagus nerve and in some studies has been shown to have positive effects on GI motility, pain thresholds and other measures.  My hypothesis in using alternating stimulation between right and left, is that it might help to recruit more autonomic brain centers and perhaps mimic walking or other right/left brain activity that can be healthful.

I had been hesitant to use ear stim on this patient because he is extremely sensitive to stimuli.  More precisely, he doesn’t perceive this, he is fine with needles or whatever I try, but his autonomic response is off the charts and very volatile.  The last time I tried cymba concha stimulation on him his stress levels went through the roof.  Fortunately, it didn’t trigger a migraine, but I’ve been cautious since.  His reactivity has continutally decreased over the years, though his migraines came under control within a few months.  So I wanted to try again with him using the alternating stim.  His sympathetic and parasympathetic data follow.  Notice the pronounced decrease in sympathetic activity, and increase in parasympathetic. 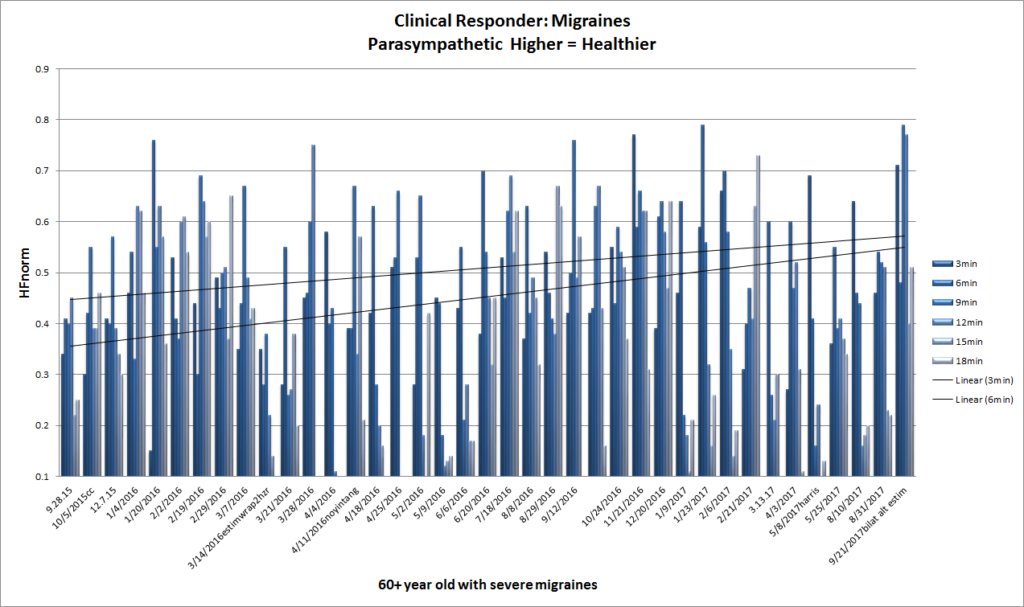