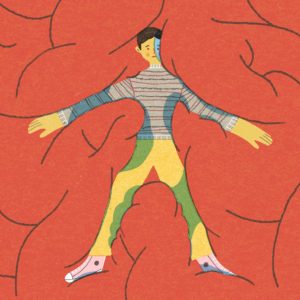 Melis Y, Apicella E, Macario M, Dozio E, Bentivoglio G, Mendolicchio L. Trans-auricular Vagus Nerve Stimulation in the Treatment of Recovered Patients Affected by Eating and Feeding Disorders and Their Comorbidities. Psychiatr Danub. 2020;32(Suppl 1):42-46.
SUMMARY
Introduction: Eating and feeding disorders (EFD’s) represent the psychiatric pathology with the highest mortality rate and one
of the major disorders with the highest psychiatric and clinical comorbidity. The vagus nerve represents one of the main components
of the sympathetic and parasympathetic nervous system and is involved in important neurophysiological functions. Previous studies
have shown that vagal nerve stimulation is effective in the treatment of resistant major depression, epilepsy and anxiety disorders. In
EFD’s there are a spectrum of symptoms which with Transcutaneous auricular Vagus Nerve Stimulation (Ta-VNS) therapy could
have a therapeutic efficacy.
Subjects and methods: Sample subjects is composed by 15 female subjects aged 18-51. Admitted to a psychiatry community
having diagnosed in according to DSM-5: anorexia nervosa (AN) (N=9), bulimia nervosa (BN) (N=5), binge eating disorder (BED)
(N=1). Psychiatric comorbidities: bipolar disorder type 1 (N=4), bipolar disorder type 2 (N=6), border line disorder (N=5). The
protocol included 9 weeks of Ta-VNS stimulation at a frequency of 1.5-3.5 mA for 4 hours per day. The variables detected in four
different times (t0, t1, t2, t3, t4) are the following: Heart Rate Variability (HRV), Hamilton Depression Rating Scale (HAMD-HDRS-
17), Body Mass Index (BMI), Beck Anxiety Index (BAI).
Results: Data analysis showed statistically significant differences between recording times (p>0.05) in HAM-D (t0=18.28±5.31;
t4=9.14±7.15), in BAI (t0=24.7±10.99; t4=13.8±7.0) the reported values show how during (T0-T4) the treatment there are a decay
of the degree in the depressive state, in the state of anxiety and an improvement in the value of BMI. In particular, the BMI in the
AN-BN sub-sample had a minimum gain of 5% and a maximum of 11%. The analysis of H.R.V. did not show a significant changes
among subjects thus confirming the discordance of the activity of the sympathetic and parasympathetic nervous system in EFD’s.
Conclusions: Although the sample does not possess a relevant value to determine long-term efficacy of Ta-VNS or on a larger
number of patients, this study reports how the application of neuro-stimulation in EFD’s may become an ADD-ON in therapeutic
approach. Indeed, substantial improvements are highlighted in the results and confirmed hypotheses proposed by the study.
Tweet
Share
Share
Pin
0 Shares
« Stents and Bypass Surgery No Better Than Medication in Even Severe Cardiovascular Disease
Electroacupuncture reduces fibromyalgia pain by downregulating the TRPV1-pERK signalling pathway in the mouse brain »